The #1 Hit TV Show on ABC, “Roseanne” was cancelled literally just hours after Roseanne Barr Tweeted a racist comment about Former President Barack Obama’s aide (Valerie Jarrett), saying she looked like the offspring of the Muslim brotherhood and the Sci-Fi film, Planet of the Apes: 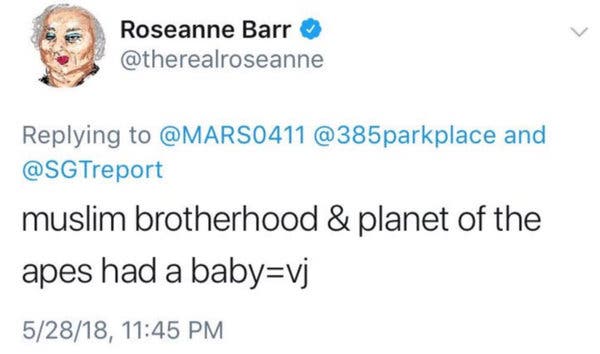 Valerie Jarrett is an African American Woman who was a Senior Adviser on the Obama Administration. While Roseanne Barr claims this Tweet was a joke, it obviously went too far.

Roseanne Barr apologized for the Tweet, but ABC’s Entertainment President, Channing Dungey, made quick work of this issue and cancelled the show, just hours after the racist Tweet. Bob Iger, Chairman & CEO of The Walt Disney Company completely supported the decision to cancel it’s top rated show in a public statement:

“Roseanne’s Twitter statement is abhorrent, repugnant and inconsistent with our values, and we have decided to cancel her show.”

Mr. Iger called Jarrett to tell her the show would be canceled.

The entire cast from the “Roseanne” reboot rebuke Roseanne’s Tweet, but remain devastated that the show they’ve all worked so hard on is now a memory with a sudden and tainted end.